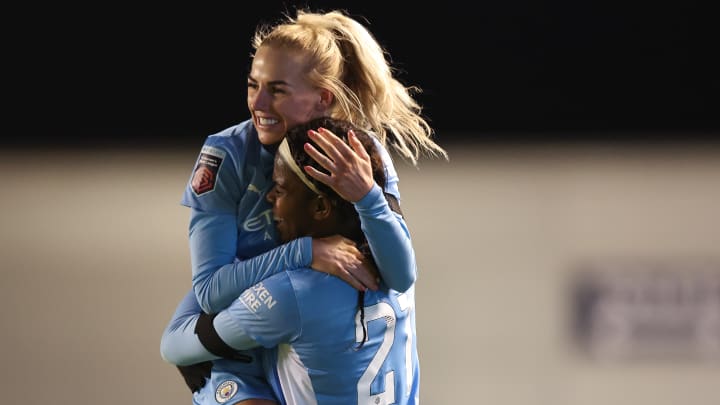 Manchester City will face Chelsea in the Continental Cup final after they ran out 3-0 winners over Tottenham at the Academy Stadium on Thursday evening.

The hosts opened the scoring in the 21st minute. Jess Park darted past Kerys Harrop before firing low past Becky Spencer.

City doubled their advantage six minutes later, Park turning provider this time as she diverted Caroline Weir’s deflected effort into the path of Khadija Shaw, who tapped the ball into an empty net.

Park and Lauren Hemp were outstanding down each flank for City. The pair combined for their side’s third as the latter headed home the former’s dinked cross to complete the scoring and confirm City’s place in the Continental Cup final.

Previewing Chelsea vs Man Utd in the Continental Cup semi-final, with team news, how to watch on TV, predicted lineups and score prediction.

Player ratings from Celtic vs Rangers in the Old Firm Derby.

Ellie Roebuck (GK) – 6/10 – Such a reassuring presence at the back. Came off her line quickly and did enough to put Jessica Naz off in the first half, but otherwise hardly had a save to make.

Demi Stokes (LB) – 6/10 – Solid defensively, efficient in possession and got forward when she could.

Alex Greenwood (CB) – 7/10 – Created City’s first opening with a fine through ball to Shaw. Played like a quarter back at times with her ability to distribute and dictate play.

Ruby Mace (CB) – 7/10 – Super composed on the ball, an outrageously mature performance from the 18-year-old.

Lucy Bronze (RB) – 7/10 – Had too much pace and strength for Naz, halting the Spurs wingers’ progress on a number of occasions with a smart bit of defending. Clattered the post with a second-half header.

Keira Walsh (DM) – 6/10 – Back in the side following a short injury layoff and was sloppy in possession early doors – her mistake almost resulting in Spurs taking the lead. Soon grew into the game and was her usual calm, composed self.

Caroline Weir (CM) – 7/10 – Saw her shot deflected in the build-up to City’s second goal, and came close to getting on the score sheet herself with an audacious first-half volley. So, so good in tight spaces.

Georgia Stanway (CM) – 6/10 – Provided a couple of dangerous deliveries to carve out opportunities for Hemp and Bronze in the second half. Industrious and energetic.

Lauren Hemp (LW) – 9/10 – Her typical adventurous self, always looking to get at her full-back. Instrumental in City’s second, turning on the afterburners to cause chaos among the Spurs backline. Rose highest to nod home City’s third.

Khadija Shaw (ST) – 7/10 – Rolled City’s first opportunity of the game narrowly wide after getting in behind the Spurs backline. Popped up in the right place at the right time to tap home City’s second.

Jess Park (RW) – 9/10 – Showed great strength, skill and composure to ease past Harrop and find the bottom corner to give City the lead, before setting up Shaw for the second and Hemp for the third. Much like Hemp on the opposite flank, Park was an absolute live wire all evening.

Spencer started between the sticks for Spurs / Visionhaus/GettyImages

Becky Spencer (GK) – 6/10 – Initially looked shaky playing out from the back but grew into the game. Couldn’t have done much about the City goals and pulled off a particularly smart save at the end of the first half.

Kerys Harrop (LB) – 5/10 – Beaten by Park in the build-up to City’s first. Had a difficult time up against City’s effervescent right winger but gave as good as she got.

Shelina Zadorsky (CB) – 4/10 – The Spurs backline looked vulnerable as they struggled to contend with the directness and pace of Park and Hemp all evening.

Molly Bartrip (CB) – 5/10 – A tough evening against City’s dangerous front three, tired towards the end after wave upon wave of City attack.

Ashleigh Neville (RB) – 3/10 – Struggled to deal with the lively Hemp – as most full-backs do – and was beaten in the build-up to City’s second goal. Replaced at half-time.

Jessica Naz (RM) – 6/10 – Robbed Walsh on the halfway line in the early stages of the first half to race clean through and create the game’s first opening – but dragged her effort wide. Switched to the left flank in the second half, but didn’t have much joy against Bronze.

Maeva Clemaron (CM) – 5/10 – Put a big shift in but was overrun at times by the fluidity of City’s midfield three.

Ria Percival (CM) – 6/10 – A tireless midfield performance from the hardworking Percival, who was just about the only player who managed to get the ball off Hemp all evening.

Roselle Ayane (LM) – 5/10 – Switched flanks with Naz in the first half but had a relatively quiet evening before being replaced on the hour.

Rachel Williams (ST) – 6/10 – Ran her heart out pressing the City backline but largely left to feed off scraps most of the evening. Replaced after 66 minutes.

Kyah Simon (ST) – 5/10 – Had a quiet evening such was City’s dominance. Much like her strike partner, Simon worked hard but was left with little to show for her efforts.