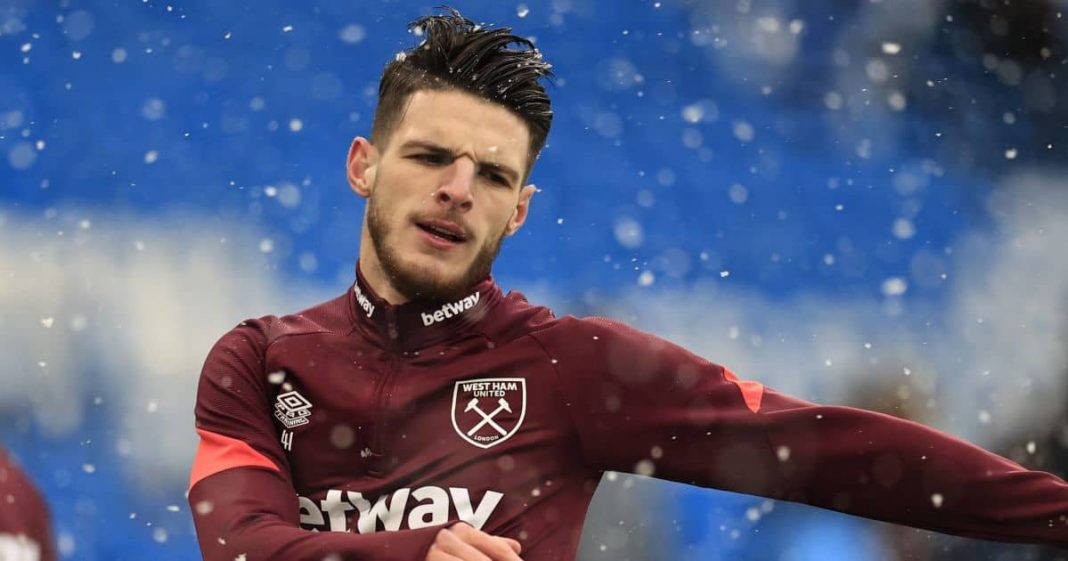 Chelsea remain the ideal destination for Declan Rice if he is to leave West Ham United in the summer, according to a report – but the Blues may have to sacrifice a current favourite to land him.

Declan Rice has earned himself plenty of admirers thanks to his performances for club and country in recent years. A regular for West Ham and England, the defensive midfielder is an in-demand player.

Links with a return to Chelsea, whom he represented as an academy player, have been long-lasting for Rice. However, he has spent his entire senior career with West Ham so far.

If any club wants to change that, they will have to spend big. His price tag has now risen to within the region of £120m. But a number of suitors are still queuing up for his signature.

According to the Daily Mail, Rice is of interest to Manchester United ahead of the summer transfer window. Finding a new holding midfielder would be useful for a squad lacking a player of Rice’s profile.

In fact, it is a priority issue for United to address in what will be a crucial summer for their rebuild.

But the report reminds that Rice will be holding out for a return to Chelsea if he departs West Ham.

Making such a move would enable him to stay in London and would also mark a return to familiar surroundings from his youth days. Chelsea released him at the age of 14.

Now, the best part of a decade later, they have been convinced by Rice’s progress since and believe he can make the grade at Stamford Bridge.

With Kylian Mbappe reportedly heading to Real Madrid, we take a look at a long list of Real flops

But for now, the 23-year-old faces a wait to see just how interested his preferred suitors are in signing him.

It may well be that United – or rivals Manchester City – are ready to make strong approaches too.

In Chelsea’s case, the Mail claim a player must be sold before Rice can be pursued. N’Golo Kante is named as the likely casualty, despite his remaining popularity.

Kante is in his 30s now and is only under contract until 2023. Therefore, Chelsea could sacrifice him to sign a long-term target.

It is not yet clear how advanced such a decision is in their thought process. For now, Rice will continue representing West Ham, trying to show his best qualities.

He has made 29 appearances for them so far this season, providing four goals and four assists. His contract at the London Stadium runs until 2024.