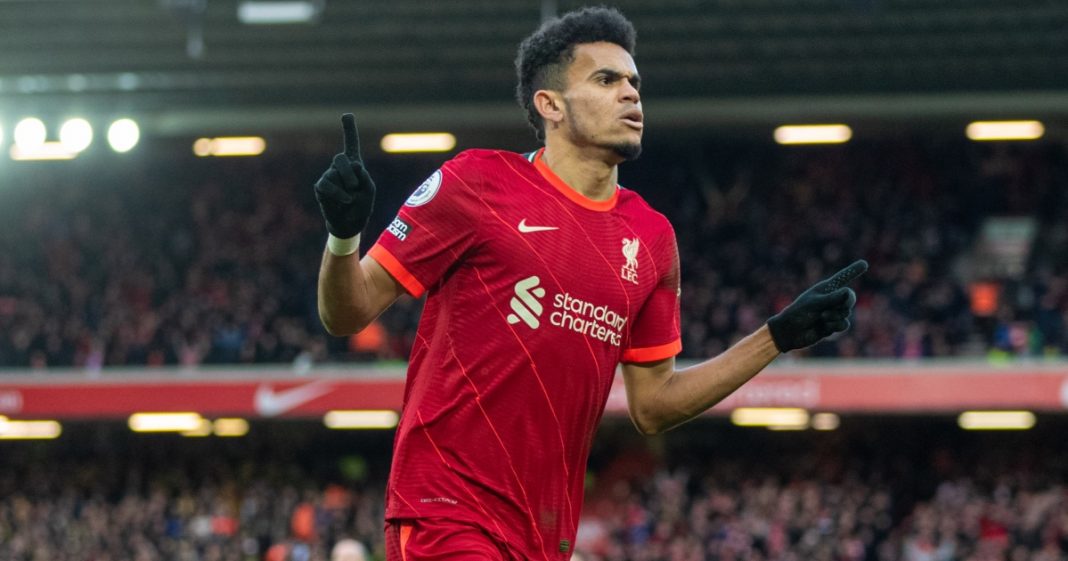 Luis Diaz has been lauded by former Liverpool striker Daniel Sturridge, who has also praised the transfer chiefs at Anfield for the January signing.

Diaz had been pursued by both Liverpool and Tottenham in the months leading up to the winter transfer window. Tottenham held talks with Porto over the left winger’s capture but Jurgen Klopp’s side marched in to win the race.

The Reds confirmed his signing on January 30 in a deal worth an initial £37.5million. It could rise to £50m if certain bonuses are met.

The Colombian attacker has already featured in the Premier League, Champions League and FA Cup for the Reds. He is adapting well to Liverpool’s system and got his first goal in the 3-1 victory over Norwich on Saturday.

Diaz was sent through on goal by an incisive Jordan Henderson pass and proceeded to beat goalkeeper Angus Gunn with a delicate chipped finish.

Sturridge, who scored 68 goals in 160 matches for Liverpool, reacted to the win by tweeting: ‘Luis Diaz looks like a top player. In the words of [former Bolton manager] Owen Coyle, ‘he’s sharp as a tack’.’

Sturridge also praised two Liverpool officials for their involvement in the Diaz deal. Mike Gordon is president of FSG, who own the Anfield club, while Julian Ward is the assistant sporting director.

Credit given to chiefs for Luis Diaz signing

‘Have to give credit to Mike and Julian cause they’re at it again, love to see it,’ Sturridge added. ‘Loving how Liverpool are playing right now. [The] title race is heating up.’

Diaz is widely seen as the long-term replacement to Sadio Mane on the left side of Klopp’s attack. Mane, who won the Africa Cup of Nations with Senegal earlier this month, recently spoke about his new team-mate.

“For sure he will do great for Liverpool because he’s so, so talented and he’s very humble. A very hard-working player.

“I don’t see it as competition. I see it as making each other better players. If you want to be a great team you need these kinds of players.

“We are really happy to have these kinds of players and for sure, we’re going to win and Liverpool will win from it.”

Meanwhile, Manchester United are looking to get one over Liverpool and gazump Klopp’s side to the signing of Fabio Carvalho this summer.

Liverpool have an agreement in principle to sign the attacking midfielder once he becomes a free agent on June 30.

Transfer guru Fabrizio Romano claims further talks with Carvalho will take place at the back end of February. If both clubs are happy with the previously agreed fee, a pre-contract agreement could be signed to avoid the need for a tribunal in the summer.

However, the Daily Star on Sunday reports that Manchester United are ready to launch a late move to hijack the deal.

They recently sent scouts to check on the 19-year-old in the FA Cup tie against Manchester City. And despite a 4-1 thumping, Carvalho caught the eye, scoring the Cottagers’ only goal that day.

Since then, the paper claims United scouts have watched Carvalho twice more over. And they are now planning a huge charm offensive to persuade the England U18s star to move to Old Trafford.

‘They trust the best’ – Tottenham captain Lloris speaks out on Conte to PSG; talks...