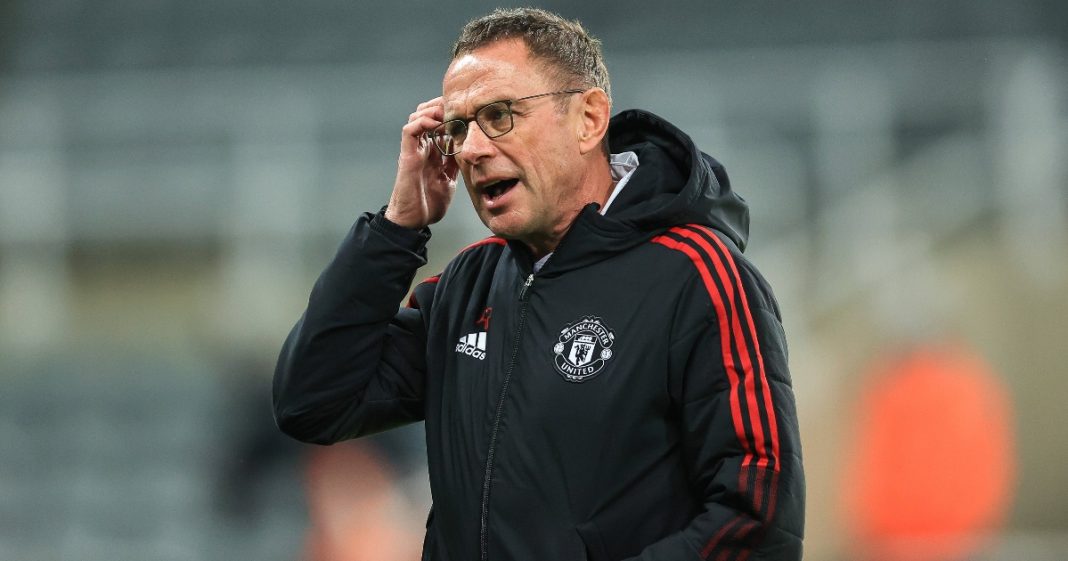 The long-term future of Ralf Rangnick at Manchester United remains unclear with the club yet to speak to the German about the plans to make him a consultant of the club.

The former Red Bull Leipzig manager was appointed to succeed Ole Gunnar Solskjaer in November 2021. The 63-year-old was appointed interim manager and signed a deal to manage the team until the end of this season.

The club then made it clear: “Following this period, Ralf and the club have agreed that he will continue in a consultancy role for a further two years.”

But, according to SportBILD, via Sport Witness, the agreement in place at this moment in time is more of a verbal one than a formal contract.

The German outlet explains that Rangnick’s job at Manchester United is very much “temporary”.

However, last month The Sun reported that United could turn to Rangnick in a permanent role after “impressing club chiefs”.

In Rangnick’s first press conference, he said he may well be open to a longer term arrangement.

“The people who I have spoken with, so far, have been very clear that we are talking about a six-month role as manager currently.  We have never spoken about anything after that in the summer,” Rangnick said in December.

“I am, of course, fully aware they are looking for a new manager. Maybe if they ask me, we will see.

“Maybe, if they ask me my opinion as you said and everything goes well and I help develop the team. I might make the same recommendation as I did at Leipzig twice and say to them for me to stay on and continue working with me!”

Rangnick and his ‘letter of intent’

But the latest report claims that Rangnick’s influence has been “limited”. Particularly as United have only allowed him to bring in two of his own coaches. The club confirmed the appointment of Chris Armas and Sascha Lense in December.

Mauricio Pochettino at Paris Saint-Germain is thought to be a leading contender. Leicester’s Brendan Rodgers and Erik Ten Hag at Ajax are also on United’s shortlist as successors to the German, who is expected to move upstairs.

However, that two-year consultancy role has “still not been concretised” and Rangnick only has a “letter of intent”.

The outlet insist there have been “no discussions” about the future since he took the job in November.

Rangnick has made it clear he wants to stay at United. He is understood to have given the hard word to Cristiano Ronaldo and Paul Pogba over rocking the Old Trafford boat.

Talks between Rangnick and those players are understood to have smoothed things over. But United appear to be hanging fire on the veteran’s future.

READ MORE: Man Utd star’s best position questioned by Paul Scholes – ‘he will get found out’