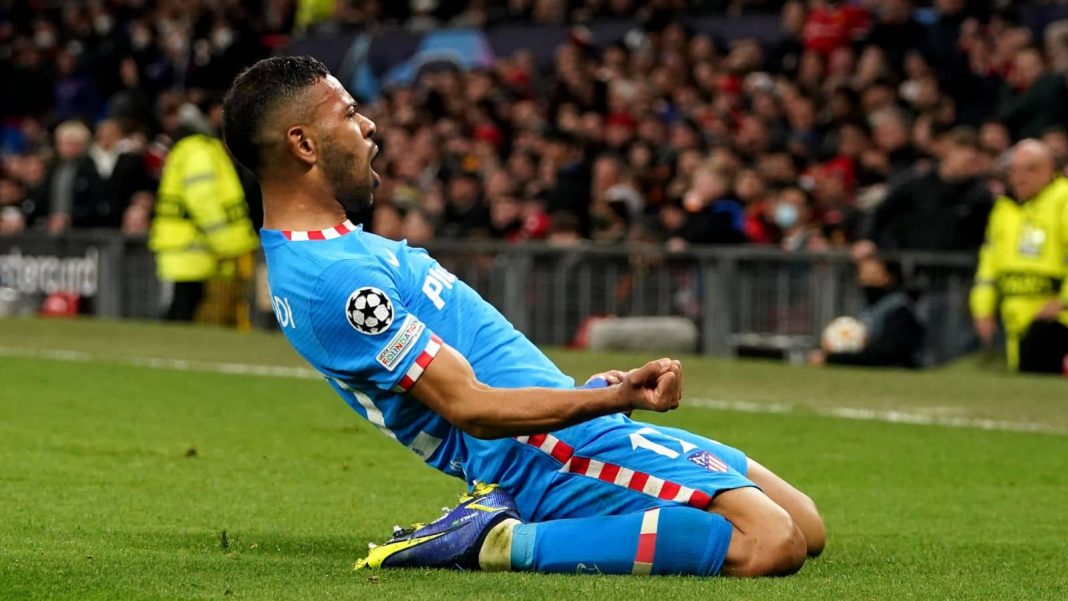 Manchester United crashed out of the Champions League as Atletico Madrid earned a 1-0 win at Old Trafford to win the last-16 tie 2-1 on aggregate.

Renan Lodi scored the decisive goal just before the break as the Spanish side then sucked the life out of a disappointing United to progress to the quarter-finals.

Anthony Elanga, who scored United’s equaliser in Madrid, came close to giving them the lead in the tie when his close-range flick was blocked by the head of Jan Oblak, who knew nothing about it.

But after having a goal chalked off for offside, the visitors opened the scoring in the 41st minute when Antoine Griezmann’s cross to the far post was headed in by Lodi, with David de Gea static at his near post.

United wanted the goal chalked off for a foul on Elanga at the other end of the pitch but VAR disagreed.

Jadon Sancho sent a thunderous volley over the bar as United pushed to level the tie, while Raphael Varane saw a header palmed away by the impressive Oblak.

Ralf Rangnick introduced Paul Pogba, Marcus Rashford, Edinson Cavani and Juan Mata in search of equaliser. However, the Red Devils failed to muster another clear-cut chance as they crashed out of the competition.

David de Gea: Made an excellent save to deny Rodrigo de Paul in the opening period but stood and watched at his near post as Lodi’s header gave Atletico the lead. 6/10

Diogo Dalot: Got forward well in the first half and tested Oblak from distance. However, he was left completely isolated and marking two players as Atletico went in front. 6

Raphael Varane: A composed presence throughout and saw a powerful header kept out by the impressive Oblak late on. United’s best player on a poor night. 7

Harry Maguire: Looked nervy early on with one or two poor defensive clearances and was clearly concerned by the threat of Griezmann and Felix throughout. His night was summed up when he was subbed by Juan Mata late on. 5

Alex Telles: Got forward well in support of Jadon Sancho but quality was lacking in the final third. 5

Scott McTominay: Started the game brightly but Fred’s more advanced role meant he could not really affect the game with his usual driving runs and was replaced by Matic in the second half. 5

Fred: Showed some fancy footwork in a more advanced position in the first half but not as effective in the second was replaced by Cavani late on. 6

Cristiano Ronaldo was not happy with the referee after Atletico Madrid opened the scoring at Old Trafford 👀#UCL pic.twitter.com/dNl5iJUAq4

Anthony Elanga: So unlucky to see an early goalbound flick cannon off the head of Jan Oblak. An early second-effort half was also kept out by the Atletico stopper. Replaced in the second half as United chased an equaliser. 6

Bruno Fernandes: Came close to drawing United level at the end of the opening half but his swerving drive was pushed out by a scrambling Oblak. Struggled to stamp his authority on the game, however, and replaced by Pogba midway through the second half. 5

Jadon Sancho: Started the game brightly but went missing as the opening half went on. Sent a thunderous volley over the bar as United pushed for an equaliser. 5

Cristiano Ronaldo: Did the majority of his best work outside the area and was nothing like the threat he was during his hat-trick heroics against Tottenham. 5

Marcus Rashford (on for Elanga, 67): Looks a shadow of the player of the past, with his confidence clearly at rock bottom. 4

Nemanja Matic (on for McTominay, 67): Put himself about when he came on but booked for throwing the ball at Joao Felix. 5

Paul Pogba (on for Fernandes, 67): Did very little when he came on apart from foul Atletico players. 4

Edinson Cavani (on for Fred, 76): Hardly touched the ball, despite United being desperate for an equaliser. 4

Eddie Howe sends warning to Newcastle stars despite win that moved them out of relegation...