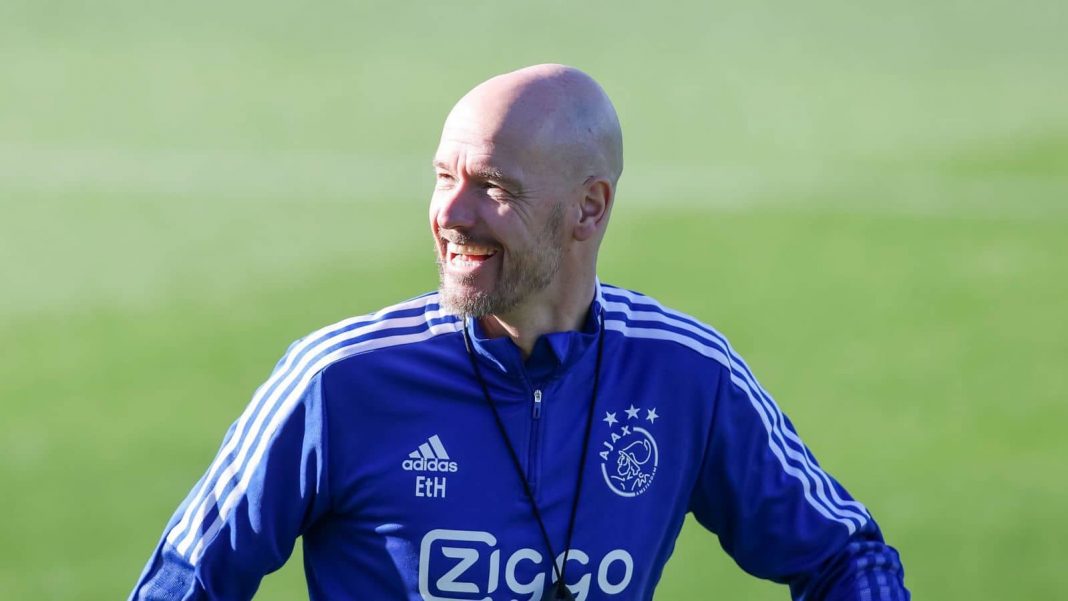 Jaap Stam believes Erik ten Hag can do two things to ensure he is successful at Manchester United, should he be announced as their next manager in the coming weeks.

United had a scare recently as RB Leipzig apparently joined the race to land ten Hag. However, those claims have since been brandished ‘absolute nonsense’ by Sport1 reporter Patrik Berger.

Due to this, Manchester United are still the frontrunners to capture the 52-year-old from Ajax. And he could be announced as early as next week, following Ajax’s Dutch cup final against PSV on Sunday.

There is huge pressure on ten Hag to impress after Ole Gunnar Solskjaer’s sacking and Ralf Rangnick’s underwhelming spell.

Gary Neville has already warned the Dutchman that Old Trafford is a ‘graveyard for reputations’. The pundit suggested Donny van de Beek will be telling ten Hag not to join the Red Devils.

Stam, who made over 120 appearances for United, has spoken about his compatriot’s potential arrival in the Premier League.

He thinks ten Hag needs to focus on two things to ensure he is successful – finishing in the top four during his first season and surrounding himself with coaches he trusts.

“The most frustrating thing for me is that you don’t see a clear way of playing football at Manchester United,” Stam said (via Sport Witness).

“If you look at the managers they have had, I wonder if they were given the time or could get it across to the players who were there at the time.

“The question is also whether the players could translate what a coach wanted. That’s not always the case.

“In the beginning, people still go along and say that you get time. But you don’t get that at a top club. The owners may fully support you and give you the time and space to build up something – the outside world thinks differently.

“As soon as things don’t go your way and you don’t get any points, the grumbling often starts. A club like Manchester United has to compete for prizes every year. They don’t settle for tenth in the first year so you can finish in the top four the year after.

“That is too romantic. That is why it is so important for Erik to gather the right people around him that can help him in that respect.

“Not only on a football level but also on a personal level. How do you present yourself and express yourself?”

READ MORE: Ferdinand identifies the only Man Utd signing in last decade who has ‘grown in value’

Vieira provides Andersen update ahead of Crystal Palace vs Leeds